A Festival of Prayer

HeartFire Festival is a new paradigm in festival culture, combining the best elements of transformational music and arts with genuine spiritual teaching and workshops, held in intentional, family-friendly events that maintain a sacred atmosphere for all participants. Connecting creative self-expression with inner self-discovery, HeartFire explores the intersection between the most modern art and the most ancient wisdom.

We have a limited number of tickets for a high-quality, intimate experience

This is a substance-free event for cultivating sobriety, lucidity, and self-discipline

Dedicated to peaceful and positive intercultural exchange and solidarity

We are committed to creating an engaging and deeply educational experience

with chapters in California, New York, Colorado, and beyond! 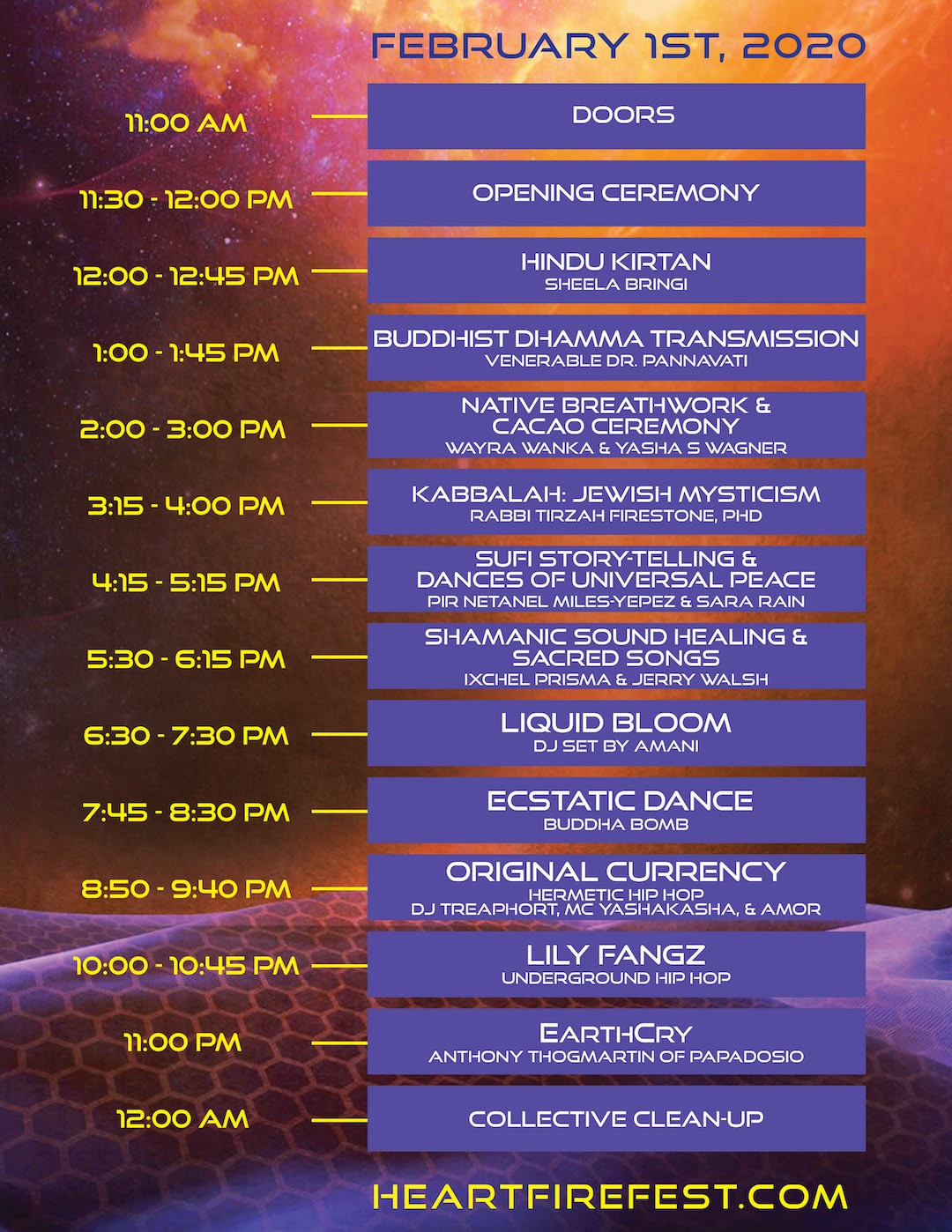 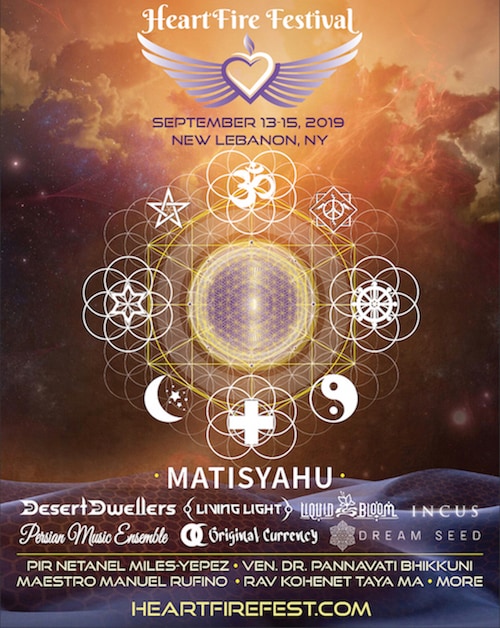 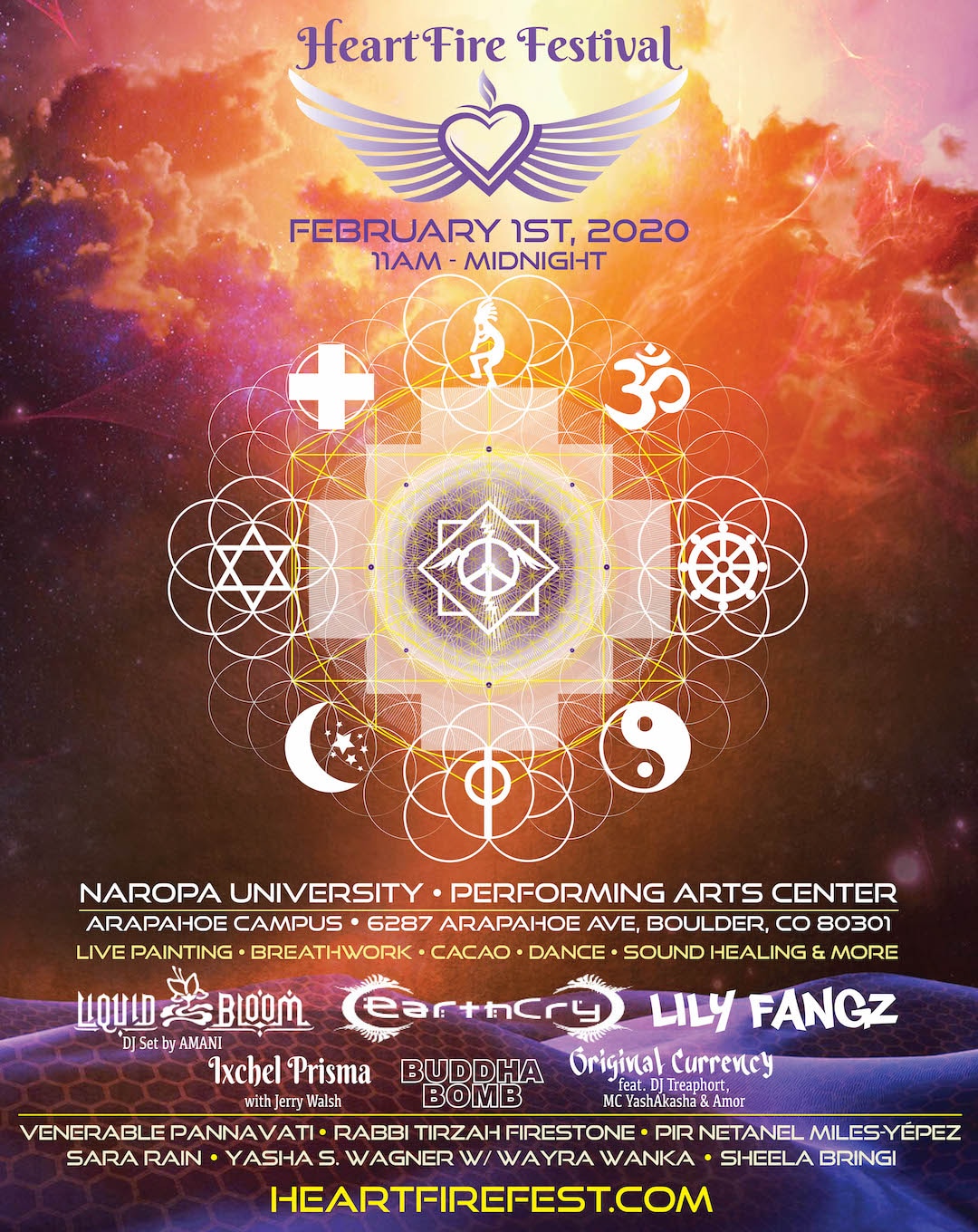 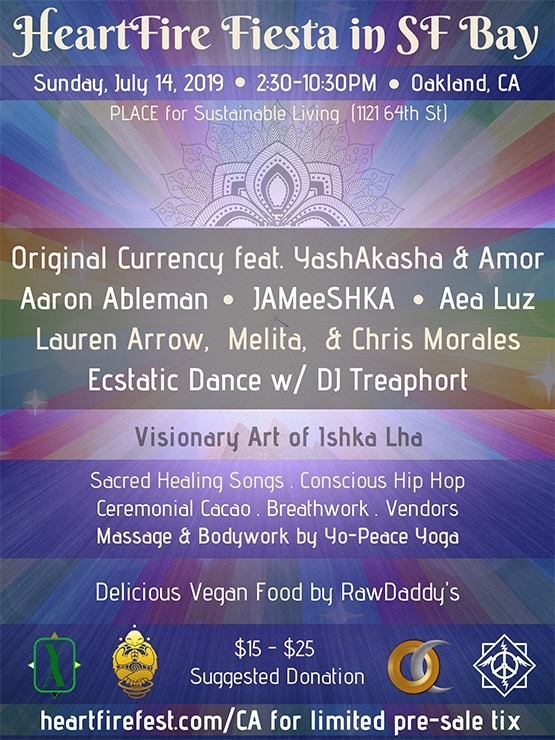 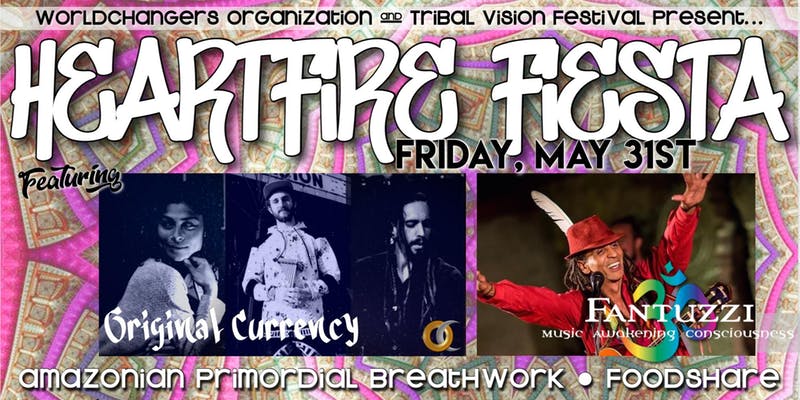 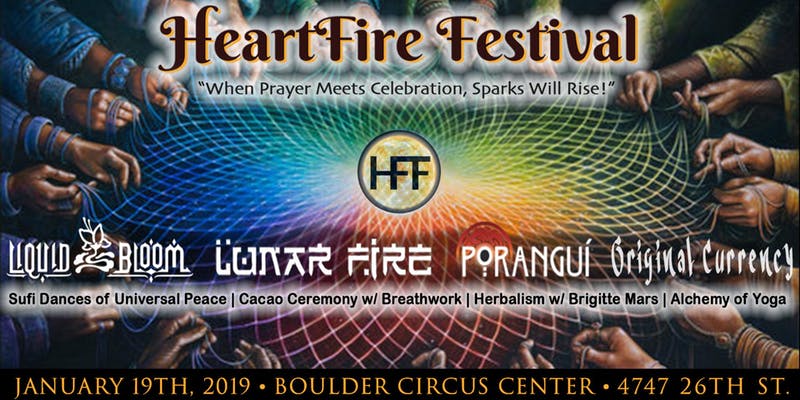 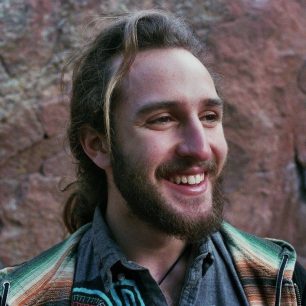 Yasha is an MC, polymath, and visionary founder of the Eight Limbs of Worldchangers Organization for Inner World Peace – a 501(c)3 nonprofit, international movement, and spiritual school responsible for various projects such as the HeartFire Festival, Trismegistus Academy, and the HauxHouse land-based community center. As an apprentice of both the Inayati-Maimuni Order and the Universal Initiatic College, he leads ceremonial rites of passage and interprets dreams. Yasha is also authorized to facilitate Qi Gong, T’ai Chi, Breathwork, Zikr, and meditation. Having studied World Wisdom Traditions at Naropa University, Yasha is now enrolled in an accelerated PhD program for Jungian Depth Psychology. Born to ex-Soviet dissidents from the Jewish intelligentsia, he produces a wide range of multilingual creative work in various mediums. Since early childhood, Yasha has traveled around the world while actively receiving and sharing interspiritual practices and initiatic traditions from various esoteric lineages. 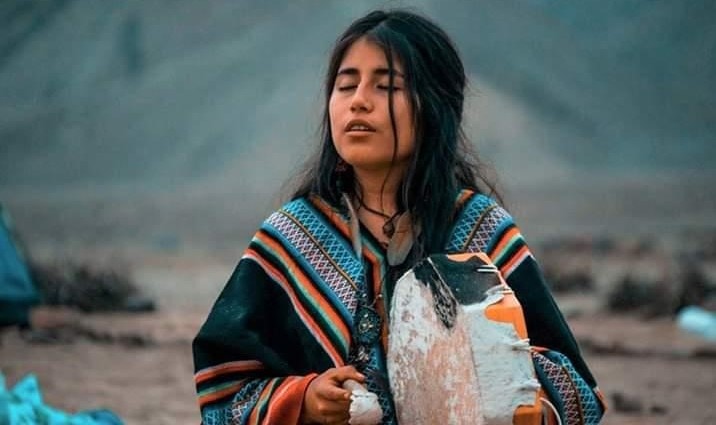 Wayra is a Muisca-Quechua healer, artist, vegetarian chef, and sacred song teacher who was born to a Mestiza family of Peruvian immigrants in Colombia. Traveling from an early age, Wayra has studied the ancestral healing practices and traditional sacred arts of her lineage. By the age of 22, she migrated from her home in South America to the mountains of Colorado – where she teaches Sacred Song Classes every week, co-facilitates in partnership with Yasha, and supports the mission of Worldchangers Organization with her gifts and passions. Cantante / artista medicina, facilitadora de saberes ancestrales y círculos del sagrado femenino, chef creadora consciente, viajera y aprendiz de la vida. 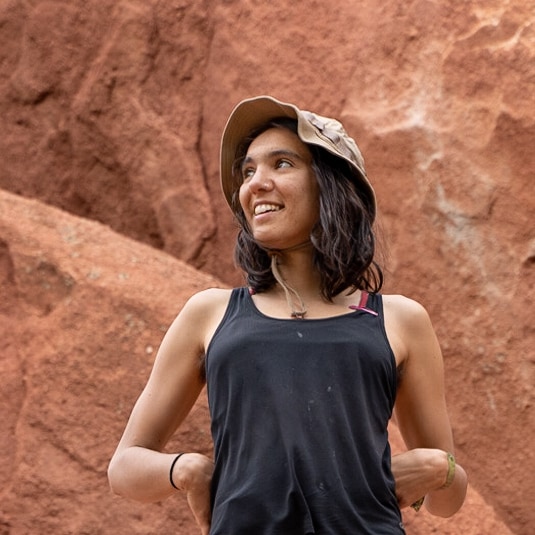 Ashke Zinctala loves plants, the forest, community, and cats. She is guided by the deer, coyote, bluebird, and cat, and finds freedom in dance. She specializes in management of all kinds, belongs to photography and writing, and creates sacred medicinal salves & tinctures. She is a descendant of Luther Standing Bear and granddaughter of Jacqueline Left Hand Bull, both members of the Sicangu Lakota.

Left Hand Bull is an appointed Continental Counselor, the highest office of individual standing in the religion, of the Baha’i faith, and is the Chair of the National Spiritual Assembly of the Baha’i. Luther Standing Bear (December 1868 – February 20, 1939) was a Sicangui and Oglala Lakota chief notable in American history as an Indian author, educator, wisdom keeper, and actor of the twentieth century. Standing Bear wrote and spoke to preserve Lakota tradition and culture and was at the forefront of the movement to change government policy toward Indigenous Americans. His writings are credited to have brought awareness to the American public of the ways in which American Indigenous culture honors and respects the sacredness of the natural world. 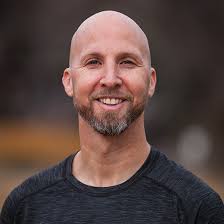 Raj works as a psycho-spiritual guide and mentor in Boulder, Colorado. He approaches his life and work through an interspiritual lens, blending Judaism, Sufism, and Yogic traditions, and finds his deepest passion in relationships and spiritual traditions. For over 15 years, he has served as a Jewish educator working to connect Judaism with spirituality, environmentalism, food issues, yoga, and the wilderness. Currently, he mentors young Jewish people as they prepare for their coming of age ceremony, B’nai Mitzvah. In 2014, Raj became an initiate (murid) of the Inayat-Maimuni Order, blending Sufi and Hasidic principles and practices. As an Inayati-Maimuni facilitator (khadim), he leads meditation, breathwork, weekly zikr and conversation on the Naropa University campus. Raj has taught yoga for over a decade, blending movement with intention through classes and workshops in Boulder and around the country. Raj is a partner, advisor, and co-producer of the HeartFire Festival. When he is not working, he enjoys time with his family and friends and exploring Boulder’s many hiking trails. 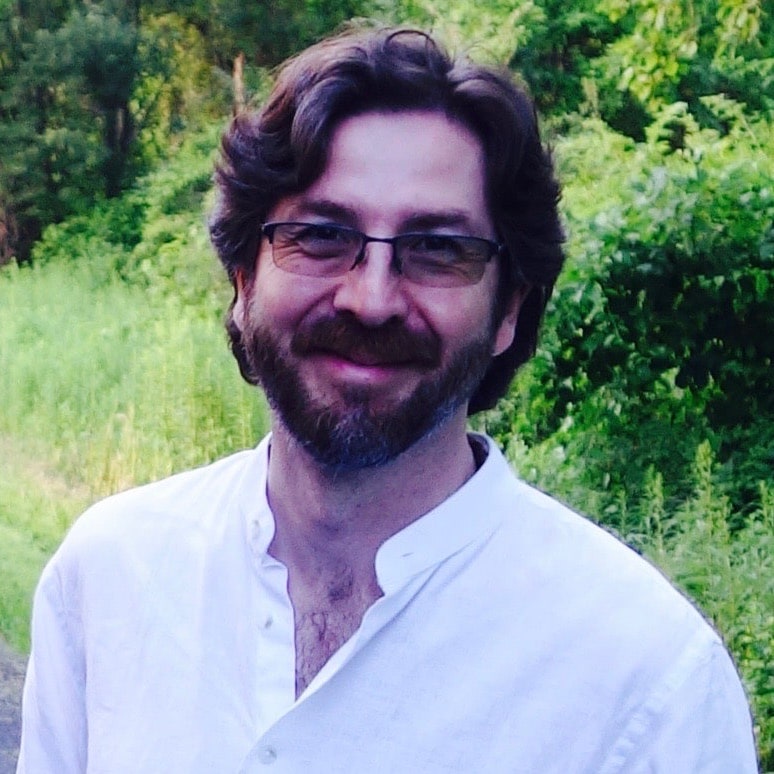 Netanel Miles-Yépez is an artist, philosopher, religion scholar, and spiritual teacher. Deeply involved in ecumenical dialogue for many years, he is considered a leading thinker in the InterSpiritual and New Monasticism movements.

Born into a Mexican-American family, in his late teens, Netanel discovered his family’s hidden Jewish roots and began to explore Judaism and other religions seriously. After studying history of religions and comparative religion at Michigan State University, he moved to Boulder, Colorado to study with the innovative Hasidic master and pioneer in ecumenical dialogue, Rabbi Zalman Schachter-Shalomi, founder of the Jewish Renewal movement. In 2004, he and Schachter-Shalomi co-founded the Sufi-Hasidic, Inayati-Maimuni lineage of Sufism, fusing the Sufi and Hasidic principles of spirituality and practice espoused by Rabbi Avraham Maimuni in 13th-century Egypt with the teachings of the Ba’al Shem Tov and Hazrat Inayat Khan. After the passing of Schachter-Shalomi in 2014, Netanel became the Pir of the Inayati-Maimuni lineage.

In addition to Schachter-Shalomi, Netanel also studied with various Sufi masters, teachers of Hinduism and Buddhism, and counts Father Thomas Keating, Trappist monk and founder of the Centering Prayer movement, as an important teacher. For a number of years, he worked closely with Edward Bastian at the Spiritual Paths Foundation, creating interspiritual dialogues and exploring the foundations of interspiritual meditation and practice.

As a writer, he is known for his critically acclaimed translation, My Love Stands Behind a Wall: A Translation of the Song of Songs and Other Poems(2015), as well as his commentaries on Hasidic spirituality (written with Rabbi Zalman Schachter-Shalomi), A Heart Afire: Stories and Teachings of the Early Hasidic Masters (2009) and A Hidden Light: Stories and Teachings of Early HaBaD and Bratzlav Hasidism (2011). He is also the editor several ecumenical works, including The Common Heart: An Experience of Interreligious Dialogue (2006) and Meditations for InterSpiritual Practice (2011).

Netanel is the president of Albion-Andalus Publications, co-founder of the Foundation for New Monasticism & InterSpirituality, and teaches in the Department of Religious Studies at Naropa University in Boulder, Colorado. 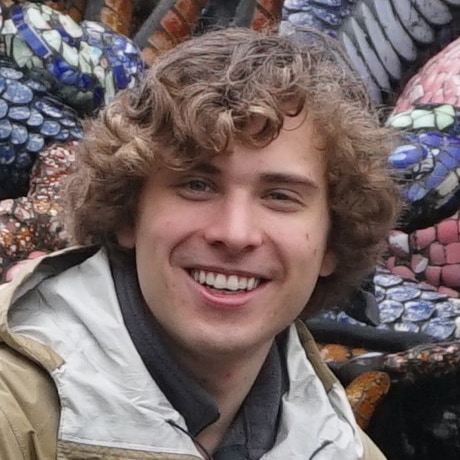 Alec has been an integral part of Worldchangers Organization since it was first conceived. He has a degree in electrical engineering from Stanford University and is focused on applying technology to a heart-centered paradigm shift for planet Earth. In high school, Alec created an algorithm that automates part of the corneal transplantation procedure, which saves the eyesight of countless individuals every year. As a result, he became a 2014 finalist for the Intel Science Talent Search competition, had a minor planet named in his honor, and traveled to the White House to meet with President Obama. 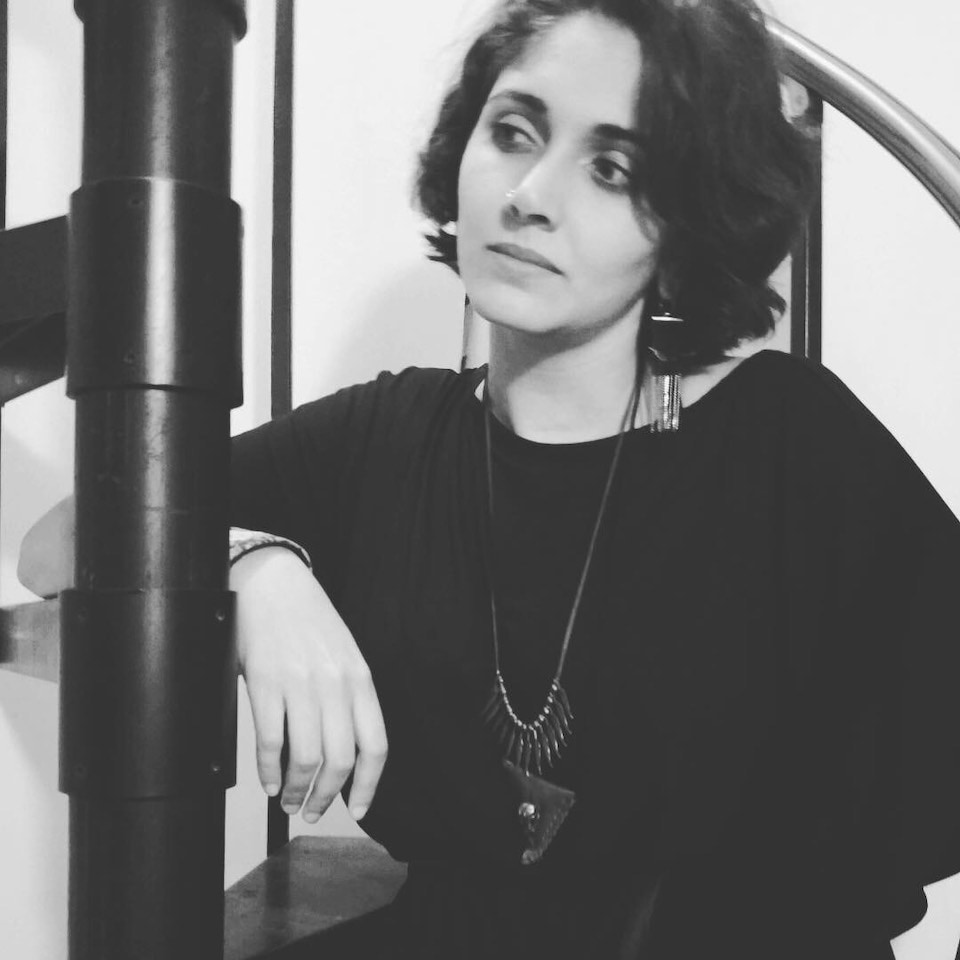 Jamelah Zidan was born in the Bronx to Palestinian immigrants. She studied Childhood Education at Sarah Lawrence and Oxford University and then taught at the Little Red Schoolhouse in New York City. She works as the Assistant Director at the Abode of the Message and is the in charge of venue relations and infrastructure for HeartFire New York.